This stinks in Cologne 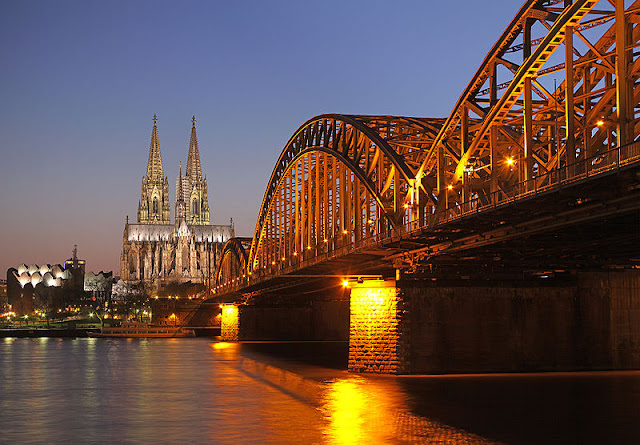 The fourth largest city in Germany actually is quite beautiful.  The photograph here was taken by a German Wikimedian named Thomas Wolf and it is featured in three languages.  The thing that stinks is that the city's archive building collapsed last year; Cologne's archive had been one of the very few that had survived World War II completely intact.  Last March the city was constructing a subway on the same street.  Then suddenly the archive tumbled.

Two people died.  Thousands of documents going back nearly 1100 years were in rubble.  Half a million photographs were housed there.  Disasters such as the Cologne archive collapse demonstrate why it is important to digitize cultural records. Digital versions help protect and preserve a heritage.

So with thoughts of Cologne, here's a photochrom print circa 1910 of the Eisenbahn Bridge at Cologne from the Library of Congress collection.  I haven't restored it yet; maybe someday. 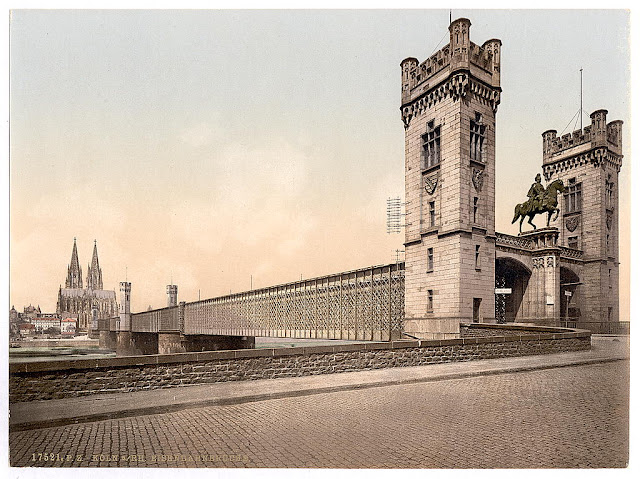 Extremely interesting. I mean, the whole blog. Stinking Cologne notwithstanding.
Me, I'm old Russian artist and author of two blogs:
fineoils.blogspot.com (Welcome!)
goolocalizations.blogspot.com (a zombie of my blog of 2005; killed by Google)

Ah! I love your photos! Keep up the wiki contributions, as wikipedia is where I learn roughly 98% percent of all of my intellectual knowledge. Too bad some of it's inaccurate. Sorry if that comment wasn't witty enough. =P

Witty enough to make me chuckle out loud. :) Thanks very much for reading and commenting. I'll do my best to keep you informed and entertained.

Hi.
You have an interesting blog!

Can you become my listerner , so i'll be your?

Fantastic Pictures, I love anything like this, anything historical. I love seeing picture comparisons of 'then' and 'now' too! Keep up good work!