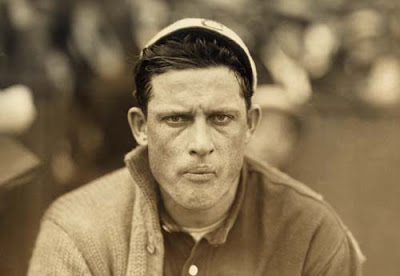 One of my biggest worries with image restoration is that somebody will come along and assume the whole thing was done in fifteen minutes with a couple of filters and plugins. That's not how I work: all of this dust and scratch removal is done by hand. So why not use plugins? For lack of a better word, because software is stupid. A plugin doesn't understand context. Sure it'd save time; for people who care more about time than about losing data that has its place. So Staxringold is working on another baseball restoration and I'm helping him out with the hard part. Above, that's Ed Walsh in 1911. The hairy situation is--of course--his hair. 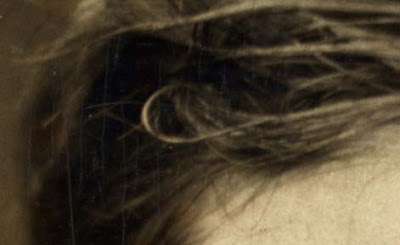 This is a part of Walsh's hair as it looked when Stax reached the end of his tether and asked for assistance. Dirt, creases, and scratches are not necessarily created equal: junk in a clear sky is easy to fix; degradation that intersects significant image data is harder to resolve. Lots of scratches and hairline cracks that interact with a mop of tousled hair is a nightmare for restoration. I don't trust software to know the difference: it's a thing to reconstruct by hand. 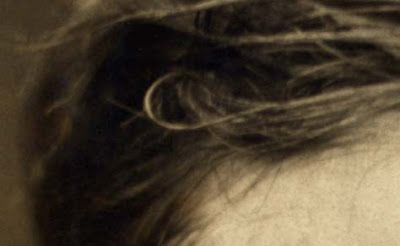 After several hours' work on the portrait this segment has gotten this far. With these matters it's often a question of how detailed to get. Do you go with the quick solution? Do you call it 'good enough' and quit? Or do you do it right because it ought to be right? 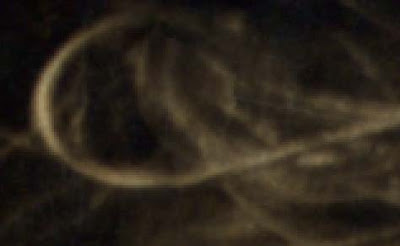 At 300% resolution, here's where this is right now. The biggest problem remaining is a scratch on the right side that runs horizontally: it's almost parallel to a nearby lock of hair. Also at lower left there are several faint vertical cracks which haven't been eliminated completely yet, plus a few other things to do.

I don't like to put my name behind slapdash work, so I'll be tweaking this a while yet. Walsh has a lot of hair (and the rest of the portrait still needs tweaks also). Stax is a good guy: when I told him how much labor this was turning into and asked for a favor in return, he accepted three choices:

1. Start a biography for Mignon Nevada. She's a soprano whose portrait I restored yesterday. The daughter of Emma Nevada.
2. Improve the biography of Duke Snider.
3. Restore a photograph from the first successful transit of the Northwest Passage.

Stax selected the third option. So now he has a view of the Gjoa weather deck when it was at Nome, Alaska. The transit took three years; Roald Amundsen and his crew were iced in for two of them. Amundsen succeeded after everybody else had failed because he took a small ship and a small crew and lived off the land. "Cool!" was Stax's reaction when he saw the photo.

This stuff is infectious.
Posted by Lise Broer at 11:44 AM