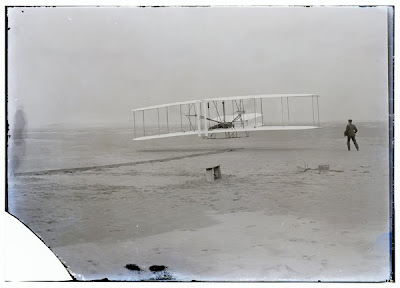 "Rewriting history" is a phrase that raises eyebrows. It could mean correcting errors in previous scholarship, but more often it prompts worries about aggressive forms of wishful thinking that obscure the record of the past. What's the equivalent with visual records, reviewing history? Somehow that sounds much milder. Perhaps too mild, because the obligation to act responsibily is equally weighty. 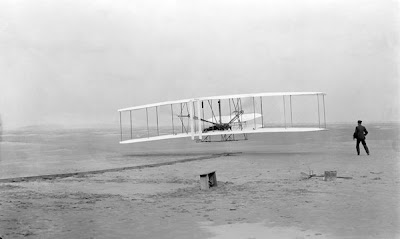 So here's the Wright Flyer on its first flight, December 17, 1903. Very important photograph; it ought to be featured. But this edit that was promoted four years ago never was to my taste. Look at that sky: it's a visual essay on why reliance on auto settings for histogram adjustments is not always a good idea.

Most of Wikipedia's featured pictures do not get much individual traffic except for their day on the main page. This one does. Last month it received 4327 individual page views, with many more views in thumbnail version at article space. The Wright brothers article received over 100,000 page views in February. It's also at Aviation (33,914 views), Aviation history, (11,044 views), Transport (49,656 views), Aerospace engineering (36,618 views), and several other English language articles. The image is also featured at Wikimedia Commons and the Japanese language edition of Wikipedia, and it appears at a total of 338 pages on 68 Wikimedia Foundation projects. 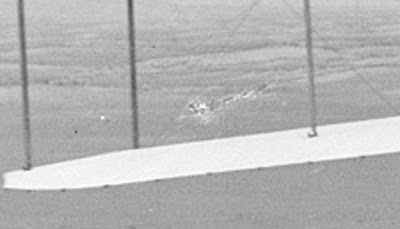 The current version is not a very careful restoration. Note the cracking still visible above the left wing. Glass negatives are delicate things. Our current featured picture was edited primarily by cropping away the worst damage. The photograph is equally important either way, but we can do better. The Library of Congress has a much higher resolution version available. I've been working on that during the last day. 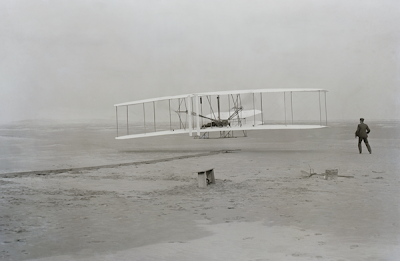 So this interim version is what I have now. It isn't finished; there's a bit more to correct before the histogram is ready to go. The toughest decision, though, has been the crop. Obviously this shot was set up for documentary purposes rather than esthetic reasons, but I've decided to take on the difficult task of including more foreground. The light patch of sand has greater continuity with a crop low enough that it approaches the left and right corners, and it seems to add to the sense of awe to raise the horizon a little higher.

This crop brings other challengs. I've managed to get rid of the blue staining at far right, and to remove a brown circular stain near Orville Wright at the edge. The left edge has been harder and there's more work remaining to be done, but I wanted to include as much of the wooden track as possible. Still deciding whether to crop out a few more pixels from the top border; that part of the sky is badly damaged.

But for some reason it's the lower left corner that prompts the most second guesses. The negative chipped and broke and that little bit is unrecoverable. So I've cheated and patched in order to achieve this crop. It's virtually certain there was nothing else there but a few square feet of sand.

A few square feet of sand at Kitty Hawk: a justifiable surmise, but a surmise for entirely esthetic reasons. Does that enter the pejorative sense of 'rewriting history'? 'Reviewing history': thousands of people see it every day, but who would notice? In four years nobody commented on the awful histogram of the current featured version.

Maybe this redirect expresses Wikipedia's priorities.
Posted by Lise Broer at 10:12 AM

Don't fret over such a tiny corner of sand. The image will still have historical integrity, IMO. If you had cloned the whole corner and not cropped at all, well then I'd be worried :)

That last one I think works best... it draws on connotations of both photography and urban geography, the latter ranging from removing layers of grime to more radical and controversial make-overs a la Urban Renewal.