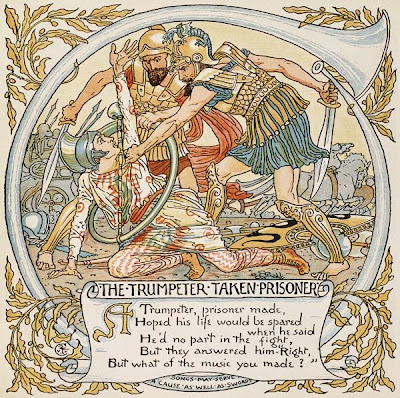 Sometimes preparation doesn't help. WikiVoices was set to a podcast today, and four hours before showtime I learned that the restoration that had been ready for half a week actually wasn't usable. We were planning an article creation episode where several editors collaborate via voice and text to start a new article and get it to DYK. Then we discovered that there actually weren't enough online third party sources for the Aesop fable we had planned to write about.

Quick, time to come up with Plan B.

The Library of Congress has a few dozen vintage childrens' books scanned and available online from cover to cover. There has actually been a fair amount of scholarship about Mother Goose, so Shoemaker's Holiday and I tore through the possibilities. Our conversation sounded something like this:

Me: "There's got to be an article on Humpty Dumpty."
Shoemaker: "There already is."
Me: "'Mistress Mary, quite contrary'"?
Shoemaker: "It's there under a slightly different title."
Me: "'Bye, Baby Bunting'"?
Shoemaker: "Already an article."

Nestled among the selections were also several well known rhymes that had never gotten their own Wikipedia articles. Shoemaker insisted upon "The Queen of Hearts" because Lewis Carroll quotes it in Alice in Wonderland. I had been pushing for "A dillar, a dollar, a ten o'clock scholar" but gave in to his good argument that there would be more sources with the Carroll reference. So he went to look for references and I opened Photoshop.

The advantage to having a good illustration for a new article is that it generally helps a nomination get a good position at Wikipedia's main page in the "Did you know?" section. That makes a good morale boost for a podcast where some of the editors had never written a DYK before. The illustrator William Wallace Denslow had created three images to accompany the poem. They were all in relatively good condition, considering they were more than a century old. Denslow was a fairly important children's book illustrator: he also provided the artwork for the first edition of The Wizard of Oz. 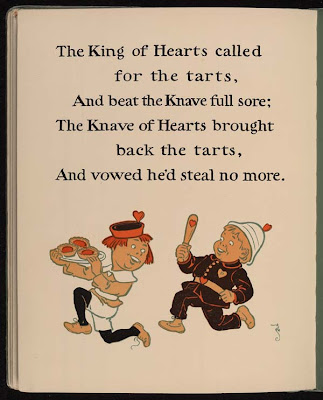 First I selected the smallest of the three images. The Knave of Hearts was the only one of the set that did not occupy a full page. This would be the simplest and quickest to complete, which was an important consideration in case any other unexpected problems arose before the recording. 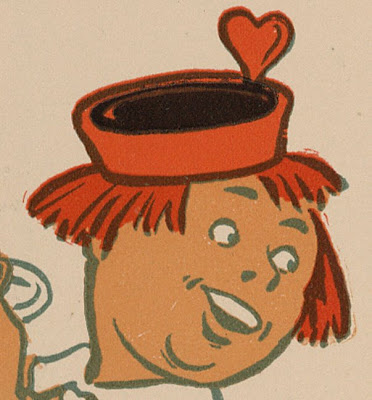 Although the range of colors is not very broad, at close examination the image has a number of small dirt specks and scratches, as well as fade. The tool to use in this situation is the clone stamp, since the healing tool can result in a mottled appearance when used on this type of printing. 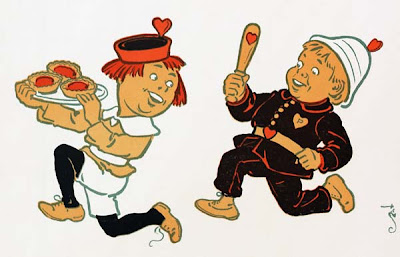 After fixing the scratches and dirt this restoration required a linear dodge and a localizedcolor adjustment to correct for the uneven lighting at far right where the page bent near the spine, plus a few other changes to simulate the colors and tonal range from the original printing. It didn't take long and by the end of the recording all three illustrations were restored.