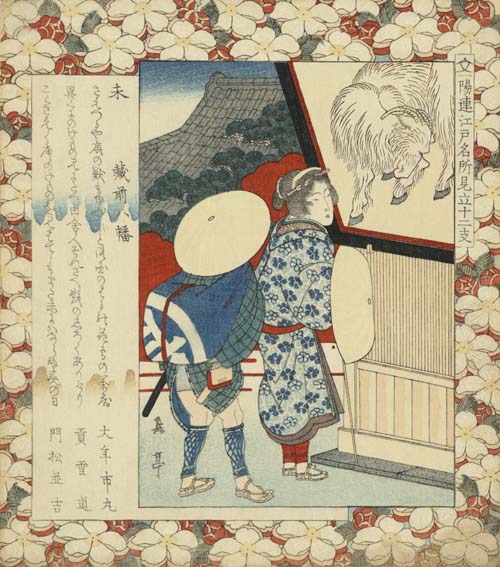 The image above is an interim save on one of my current projects: an early nineteenth century Japanese woodblock print of the ram from the Chinese zodiac.  The artist is Gogaku Yajima, who doesn't have a Wikipedia biography yet. It's an attractive print, but as you can see from the lower right corner this isn't in pristine condition.  Have already spent about seven or eight hours to bring the restoration this far.  What follows is a close-up of the upper border before starting work on the hardest part of this project.  Notice the odd mark that branches downward from the upper edge.

At a glance it looks like really sloppy click-and-drag clone stamping, but close up the problem isn't consistent with post-digital alteration.  My best guess is that the rice paper print developed a tear and that the mark represents an attempt at physical repair.  Someone might have added a reinforcement to the reverse side of the paper and used an adhesive.  Then, since the repair could have occurred generations ago, over time the adhesive had a chemical reaction with the paper which resulted in that branching stain.  It would be interesting to contact the library staff and see whether this guess is accurate.  But for today the challenge is how to make it disappear. 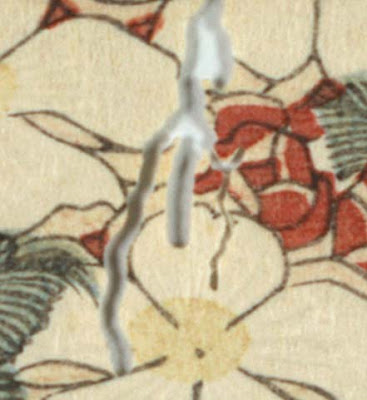 For starters, here's a closer look.  The border is a repeating pattern of cherry blossoms.  This takes careful study because reconstruction of the design involves inferring the shapes of three flowers and a bud.

Repairs to complex areas such as this are much more difficult than repairs to solid colors.  A photograph print that gets torn at a cloudless sky could be fixed in a minute.  Damage to near-random features such as a sandy beach or a grassy field are also fairly simple.  This is a different matter.

When I look at this type of image I estimate the difficulty in terms of five elements:

This bit of damage interacts with the woodcut design in complex ways.  If I want the repair to look seamless, and I do, it's going to take a few hours to get this right.  Here are a few close-ups from screen shots as the work progressed.  You'll see how, progressively, I fixed areas and inferred colors and shapes.

In the far right frame I actually altered one petal, which is something I don't like to do.  That particular area had sustained so much damage that I had difficulty understanding what the shape was intended to be.  If I'm a stickler I might go back and recreate that petal again, because after a day I had better ideas.  These are the kinds of decisions that make me bite my lip.  If the feature were a face instead of a flower I wouldn't have attempted to alter it.

After a bit more cleanup around the edges, here's how that area looks now.