It's always a pleasure to see people react with delight when they first encounter a restored image of their own culture. Yet it's rare to find a feature-worthy image of my own local area. Although San Diego is the oldest city in California, it was far from the gold rush. So the Library of Congress collection has far more historic images of San Francisco and not much quality material about the southern end of the state. Yet last night a high resolution photochrom turned up of our most famous local landmarks: the Hotel del Coronado. Ooh, this was exciting. 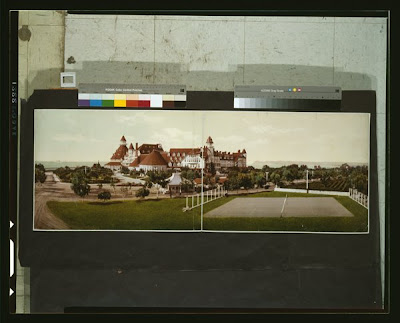 The bibliographic notes described this as a color slide. Well, that's right and it's wrong. The image itself is a photochrom c. 1900. Photochrom is a hybrid between black and white photography and chromolithography. Basically, before real color films were invented this was a type of colorization, nineteenth century style. Several decades later the damaged print was photographed for archival purposes on Kodak slide film. So although this is a color slide in one sense, in another sense it isn't.

When reviewing an archival image it's good to know what type of image it is, and also very important to assess the challenges to restoration. This one had two levels of challenge. One was more obvious than the other.

This is easy to spot in the original: the original panorama was photographed in two parts, then later the print got creased from careless folding. So up and down through the center of this image there are two white lines: one straight, one jagged. The image on the right doesn't quite match up with the one on the left either: a few pixels are missing. So it's necessary to go up and down patching in missing data. That's easy to do on the sky at top and the lawn at bottom, but to fill in the architectural details takes work. The more boundaries of any sort that a crease or a seam or a scratch crosses, the harder it will be to repair. This one crosses many boundaries in an important part of the image.

Basically what I do is first move the right portion into proper alignment, then take the healing brush and clone stamp to fill in data from surrounding material. A way to repair a damaged window on the print is to borrow data from a similar window; to fill in a missing portion of the eave, borrow from another part of the same eave. Then blend in so the stretch looks natural. By starting with the easiest parts and moving in to the complex areas, eventually the entire seam disappears.

It's not exactly easy, except in a relative sense. There's a tougher problem on this image that's less apparent at first glance.

Here's a demonstration of the problem. It's the sky. The trouble is easier to recognize after a preview selection and auto levels on the unrestored version. We don't do the restoration work on a levels preview, of course. It's just a good way to see whether something subtle would become a bigger problem than it seemed at first glance.

The natural first step in restoring the sky is to remove dirt and other marks. That's normal for any historic restoration. This is an unusual sky, though, and it has three additional problems.
It's normal for paper to dry out and darken at the edges. That makes sense if we remember that even though the digitization comes from a color slide, that slide must have been a photograph of an older print. If the original were shot and printed around 1900, then it would have waited four decades or more before technology developed to create the archival slide copy. So we have an explanation for the edge fade. The solution is relatively simple: patch and blend.

The bright area at center is harder to correct, though. And so is the uneven color loss and uneven contrast. Without getting too much into details, the solution involved a series of adjustment layers. The end result isn't quite natural blue sky, but then photochrom isn't a natural color process. It's colorization. So a slightly artificial appearance is expected.

The important thing about this restoration is to recognize that there can be multiple challenges: obvious problems sometimes distract from non-obvious ones. It could be discouraging to a novice restorationist to finish the seam at the center and then get mired in the tougher challenges of the sky. If you're starting out at this sort of thing, get to know a few people who already do it. It's better to start off on material that's really within your skill set or to get a helping hand with the tough parts, than to put days into an image for sentimental reasons and then push it aside because you've gotten stuck.
Posted by Lise Broer at 4:03 PM

Wow! Thank you! Honestly, I love the internet for having writers like yourself that sit down and take time to educate, and mentor us into preparing us through the right way to succeed in life. Whether you think that this helps or not, I just want you to know that it most definitely makes a huge impact and a difference for someone like myself. I'm taking my time to write this because I don't want you to go feeling un-noticed! You have most definitely been recognized and you should know that this has surely helped me along my way! Thank you once again, really..
Have a great day!
Compaq Laptop Parts