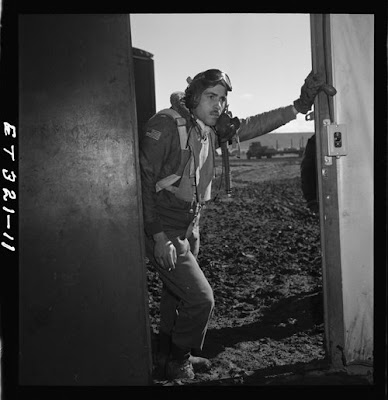 One of the greatest fears of serious restoration work is that somebody will come along and suppose it was all done by hitting three buttons in Photoshop. Actually it was two days into this one getting the background to a natural tone when the thought occurred 'I'm cleaning dirt.' Why care that much?

The Tuskegee Airmen of World War II were the first African-American pilots in United States military history. This particular image caught my attention because of its composition and the expression in the subject's eyes. I had been searching for portraits of Booker T. Washington, then Marcus Garvey, then Doris Miller. Archival searches yield a lot of heartaches: the photographs that looked promising weren't available in high resolution and the high resolution images had serious technical flaws. Then this turned up. And it was a pleasant surprise to discover it was taken by Toni Frissell, the official photographer of the Women's Army Corps. It isn't often one finds a technically superior image on a significant subject that counters two kinds of systemic bias. Overall, only about 1 in 1000 archival images has the technical parameters to consider for featured candidacy with restoration. 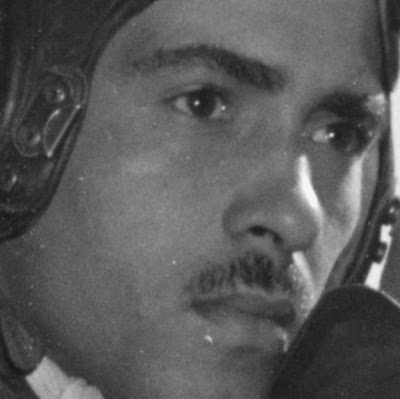 Yet there were serious problems ahead. When the full 25MB TIFF file downloaded it became clear that this would be no easy cleanup. Thousands of tiny white flecks populated the image. This was unusual for a photo less than seven decades old and the problem was probably a shortage of fixative in the original emulsion.

Fortunately the face suffered relatively light damage compared to other areas, but this close-up gives some idea of what resulted. This is culture. This is history. Yes, the restoration took two days: hours on the grain in the cheap plywood wall at left and hours more getting photographic degradation out of the dirt. On an image like this I don't consider the work done until I view the thing at 300% resolution and can't see the flaws, but the labor was worth it. It's worth preserving his face; it's worth preserving his eyes.

It would be interesting to locate enough information about Edward M. Thomas, the man in this photograph, to justify a Wikipedia biography entry. He came from Chicago, Illinois, reached the rank of Captain, and was awarded the Distinguished Flying Cross. This is the text of the citation: 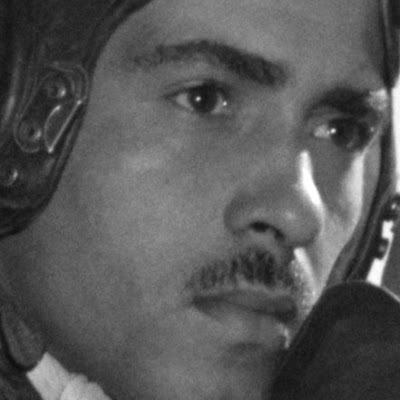 For extraordinary achievement in aerial flight P-51 type aircraft in the Mediterranean theatre of operation. Lt. Thomas’ outstanding courage, aggressiveness and leadership enabled the formation to inflict damage upon a heavily defended airdrome in Athens, Greece. On October 6, 1944, Lt. Thomas flew as a flight leader in a formation of 14 aircraft assigned to strafe the heavily defended Totoi Airdrome and the surrounding terrain. Upon approach of the formation towards the airfield, Lt. Thomas’ aircraft was hit by flak. Disregarding all thought of personal safety, Lt. Thomas courageously pressed his attack to a deck level and destroyed two enemy aircraft and damaged another. Due to his exact judgement, skill and aggressiveness, a total of 11 enemy aircraft was destroyed or damaged without loss to any aircraft of his section. Flying over treacherous, mountainous terrain, under adverse weather condition and against severe enemy opposition, Lt. Thomas flew 81 hazardous combat missions for a total of 205 combat hours. His outstanding courage, judgement, unquestionable devotion to duty and professional skill have reflected great credit upon himself and the Armed Forces of the United States of America.

Captain Edward M. Thomas did not survive the war.