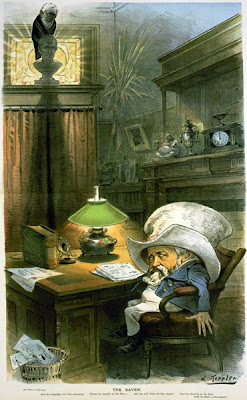 Interesting how the digital age has altered encyclopedias. During the 1990s--when Encarta was in its heyday--publishers oriented toward expanding media content rather than scope: it's expensive to use color illustrations in a paper and ink publication, but that cost drops with digitization and new options become possible: sound and video. Where Wikipedia innovated (aside from its open edit structure) was in terms of scope: the economics of dead trees publishing had kept encyclopedias to a certain size. Encarta's premium edition is barely over 60,000 articles. Wikipedia kept adding more articles. Things have come full circle, though, and Wikipedians turned to devaluing media.

A recent example was the featured article candidacy for the biography of United States President Benjamin Harrison. Awadewit reviews featured article candidate images for copyright compliance (bless her for that) and suggested I might find a portrait to restore for featured picture candidacy. So I toddled over to the Library of Congress website where the first charming thing that caught my eye was a caricature from Puck. Lovely, but a bit small even at full size for consideration. Unfortunately none of the formal photographs had the right technical parameters for featured picture consideration, but three lithographs did. Awadewit suggested putting the selection to the article's editors. So I posted to the article talk page. Any one of the three would be an enormous undertaking--they're all over 200MB. And with featured article candidacy underway, editors are at their most eager for any improvement to a page.

How much response did that offer bring? Not one murmur for six days, until an IP weighed in. Thank you, IP editor. To the rest I don't know what to say.

Let's face facts: when people browse Wikipedia they don't skim to the third section and look for brilliant copyediting. They notice the lead image and the caption. If the media elements are interesting they're more likely to stay and read the rest.

I've also located an audio file of Lyndon Johnson's speech when he signed the Civil Rights Act of 1964. In light of this month's events it seems fitting to nominate it for featured sound. The candidacy should go live soon.

Fortunately this year's WikiCup has brought new interest in featured pictures and featured sounds. So might as well announce this openly: winning ain't everything. It ain't even that important. But getting more restorationists is. I've been passing out suitable material to about half a dozen participants and would gladly help more, including follow-up with technical assistance. Shoemaker's Holiday, who restores using different software, is glad to assist new restorationists also.

If we had 100 restorationists each doing 2 restorations a week, Wikipedia could gain 10,000 featured pictures in one year.

And in the longer term we're looking to gain access to more national libraries and archives. We want to restore the world's history, not just Benjamin Harrison.
Posted by Lise Broer at 12:57 PM