Awadewit is among the Wikipedians I most admire: a prolific contributor of high quality articles on scholarly topics, and a joy to work with.  She's completing her dissertation in eighteenth century children's literature this year, so as a gesture of thanks for her hard work I've done a little restoration for her today.  She surprised me last month by saying she's actually used my restorations as examples in the introductory undergraduate classes she teaches. Well here's something closer to her real world scholarship: a William Blake illustration for Mary Wollstonecraft's Original Stories from Real Life.

"Wow - they look so different from the Blake versions - so much softer" was her first reaction.  After a moment of poking through the bibliographic notes I confirmed a suspicion: this is indeed the Blake version, scanned from his original sketch for the frontispiece.

Here's wishing the digital file were higher resolution.  The Library of Congress has been digitizing its collection for fifteen years; some of the older digitization isn't quite at the technical excellence of their recent work.  Equipment and formats have changed, and their staff has gotten better at it.  So this might be a viable featured picture candidate at English Wikipedia but the higher Wikimedia Commons technical requirements would exclude it from serious candidacy.

Nonetheless, a medium resolution file is usually less work to restore--the smaller damage just doesn't show up at this resolution.  So I did a quick restoration for Awadewit to cheer her on through the final months of the dissertation.  First, let's have a peek at the version of this image which appeared in the printed edition. 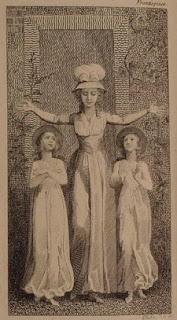 This is basically a mirror image of the sketch.  Maybe the Library of Congress has been spoiling me: the file that was in use at the Wikipedia article was less than 50 kilobytes.  It's stained, faded, yellowed, and suffers from distortion, plus the crop is so tight that it would be difficult to correct the problems if the filesize were large enough to work with.

Really, it's best to restore files that are at least 10 megabytes in uncompressed format.  I don't call an image large unless it's more than 100 megabytes.  On a fairly frequent basis other Wikipedians ask me to restore material that is only a few dozen kilobytes.  I can't produce a featured picture from that; the magic has its limits.

Getting back to this project, though, one issue worth mentioning is how to deal with staining.  Stains can be a problem when they occur over important parts of an image.  In this instance a large brown stain occurs on the central figure's knee.  I've blown this up to about double the original resolution. 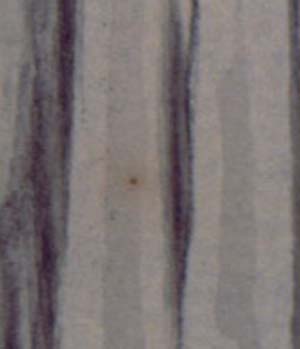 This stain consists of two parts: a small deep brown spot surrounded by a much larger faint discoloration.  First I got rid of the small spot.  The easiest way to do that is with a clone stamp at 35% hardness, but with a careful and steady hand it's possible to get a more natural effect with the healing brush.  The healing tool algorithm usually works poorly in the middle of narrow stripes, but if the sample point is the same distance from a line as the destination point the tool can give a pleasant blended effect.  It's quite tricky to do this and often takes several tries because if it isn't done just right the tool will create an ugly smear.

Unnatural healing brush smears are a hallmark of poor image editing; that's something to really avoid.  If you feel like trying this trick the way to get the feel for it is by backing up through the history when a smear occurs (and you will make smears--a lot of them--so don't feel bad).  Don't try to re-heal a smear; it'll only smear worse.  Just choose a new source point, try to line it up just so, and eventually the spot will vanish perfectly.

Of course there's still the larger stain.  Low intensity stains are basically localized color problems.  So I treat this like any other local color correction: choose the selection lasso, set feathering to 10 pixels (which is not very much, but appropriate for a small image), and create an adjustment layer to manually adjust the colors.  Think of "brown stain" as "deficient in blue" and nudge the RGB sliders until the colors appear consistent.  Don't try to be hasty and copy the same tweaks to the light, medium, and dark ranges: often the best results come from slightly different settings.


With additional work the final version comes out looking like this. 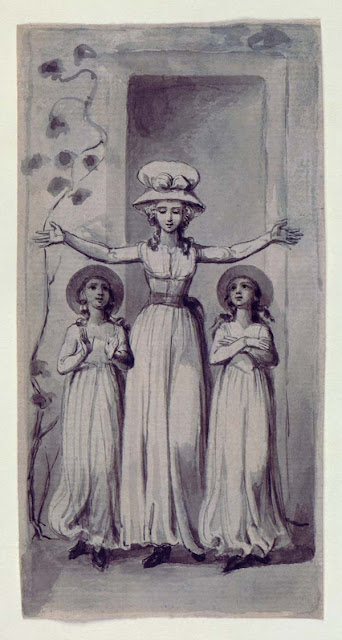 Three cheers for Awadewit and her Dissertation!   (Now Awadewit, go finish it). ;)