At right is a spectacular portrait of Willy Brandt, former German chancellor and Nobel Peace Price winner.  He was mayor of West Berlin when the Berlin Wall was built.  His likeness was nominated for featured picture at English Wikipedia earlier this year, but failed on technical issues.  Brandt's portrait was part of a very generous donation from the German National Archive.  Yet at 568 × 800 pixels, file size: 47 KB it just didn't meet the minimum criteria.

Several months ago I performed a courtesy restoration on a higher resolution portrait of Konrad Adenauer, which unfortunately can't be uploaded to Commons because the Bundesarchiv retained full copyright over its high resolution digitized files.

So if it's possible, I'd like to renew the request to Bundesarchiv to seek selected copies of higher resolution material.  The lighting and expression on this Brandt portrait is brilliant; he deserves attention on the site's main page.

There's another reason to make this request.  There's another image that was nominated for delisting nearly two years ago, and it was retained because a cultural institution donated a higher resolution version.  Featured content criteria tend to rise over time, and the lower resolution version had been nominated and promoted before the standards changed.  It's quite famous. 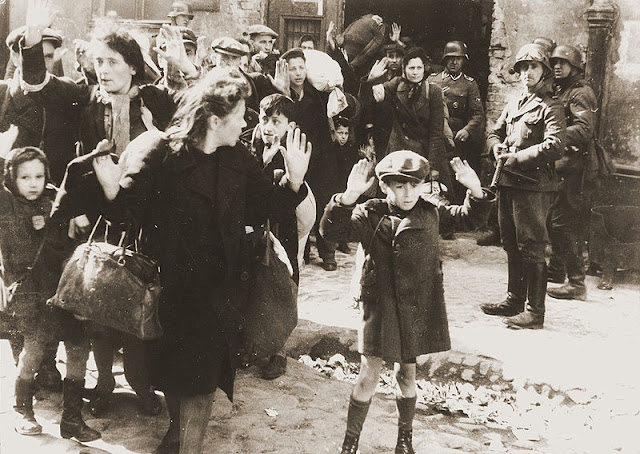 The final days of the Warsaw Ghetto Uprising.  Many thanks to the United States Holocaust Memorial Museum for their assistance.  The lower resolution version had been on the route to delisting.  Since then the photograph has been featured on several projects including the Turkish Language Wikipedia.  It's amazing how far one donation can go toward raising awareness.

One reason I'd love to be able to upload a better resolution version of Adenauer or Brandt is for balance; not everybody in Germany during World War II agreed with the government's policies at that time.  Adenauer and Brandt were among the people who helped rebuild Germany into a respectable country again.  It takes a special sort of leadership to steer a country that had gone off on such a bad course back to stability and democracy.
----
Image credit:
http://en.wikipedia.org/wiki/File:Bundesarchiv_B_145_Bild-F057884-0009,_Willy_Brandt.jpg
Posted by Lise Broer at 3:33 PM

Wow that photo is quite haunting. The moment I saw it my heart stopped. Those children are what really get you.

Photography is an incredible way of capturing the exact moment, feelings and thoughts and all frozen for eternity. I wonder how long these people survived after the photo was taken. It's heartrending.