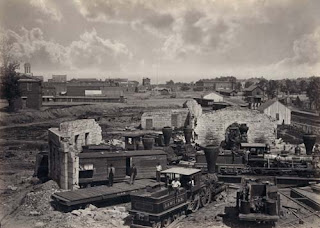 Occasionally a restoration project goes onto the back burner for a while.  Most of this image was routine.  It's a photographic print from the end of the American Civil War that shows the ruins of a railway roundhouse after Atlanta was burned.  The serious problems were in the sky. 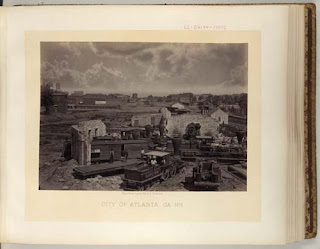 The project started as a scan from a high resolution album. A fascinating historic document: at the time when this war happened photographic technology was just reaching a level where serious visual documentation was becoming possible. Quite a few of the prints from this album may become featured pictures eventually. Roundhouses were sturdy structures.  To see this one almost completely demolished is a powerful reminder of the destructive force of that war.

Relatively speaking, skies are easier to fix than other elements on a photograph.  The data beneath the horizon was basically sound so I selected this print as a project.  But this isn't a simple blue sky; those cumulus cloud formations turned out to be quite frustrating.

This sky has several problems: brightness differences, creases, and stains.  It looks like a combination of chemical and physical damage affected the upper center.  A lot of work went into correcting these features and I wasn't confident about the result.

It's a matter of how high to set one's standards.  On every subject there will be a few people who spot inconsistency.  When a television program switches props between scenes, ninety-nine people out of a hundred may notice nothing, but there will also be one person who says, "Wait!  He was wearing a three-quarter helmet when he parked the motorcycle.  But now he's walking into the house carrying a full face helmet.  That makes no sense."

A pure blue sky is easy to repair, but cloud formations are meteorological phenomena.  Would this edit insult the intelligence of a person who understands meteorology?

In true wiki fashion I asked another amateur editor.  Juliancolton isn't a meteorologist, but he has written about twenty featured articles about hurricanes.  That shows either very good judgment or very bad judgment on my part; take your pick.

When Julian received both images he was slow to reply.  At least he wasn't indignant about the edit.  After discussion he agreed it looked credible.

Which is a relief.  But since Wikimedia Commons is a wiki I'll also be uploading a partial edit (without hisotgram or color adjustment) in case someone disagrees.
Posted by Lise Broer at 12:28 PM

Hi. This post is likeable and your blog is very interesting, congratulations!!