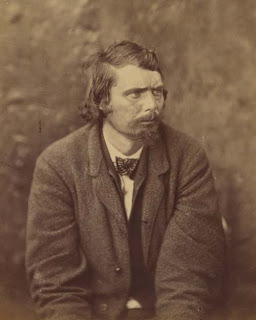 Wikipedia's internal manual of style says portraits shouldn't look away from the text.  At the actual biography this one looks away.  A lot of them do.  In this instance that choice especially apt; this is George Atzerodt.  The night Abraham Lincoln was assassinated, Atzerodt had plans to assassinate Vice President Johnson.  Atzerodt was an associate of John Wilkes Booth.  Except after Atzerodt arrived at the hotel where Johnson was staying he didn't go upstairs; he stopped at the bar.

And got drunk instead. 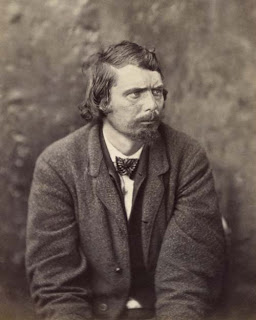 Atzerodt could have notified the authorities and perhaps saved Lincoln's life; he didn't.  Atzerodt could have backed out of the conspiracy; he didn't do that either.  He could have tried to kill Johnson.  Instead he went on a bender.  This portrait was taken after his arrest.  The irons on his wrists are slightly out of frame.   He went to the gallows after having earned the respect of nobody.

The look on his face seems to summarize the man: intensely avoiding eye contact. 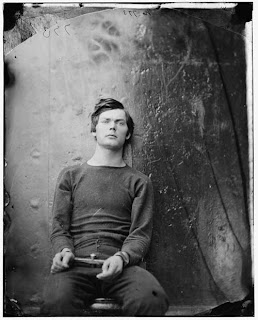 The Atzerodt portrait was a restoration I did several months ago.  There's another set of portraits from the same group that's more challenging.  Alexander Gardner's portraits of Lewis Powell have an informality that was rare for the era.  Powell was twenty-one years old.  He has the build of a college athlete, except the manacles are visible and he leans against the gun turret of a Monitor class warship.  Powell had stabbed Secretary of State William Seward repeatedly in an attempted assassination.  It was a lucky chance that Seward survived.  When Powell assaulted Seward, Seward was bedridden and wore a neck brace.  The brace prevented Powell's knife from reaching the jugular vein.

A neck brace and some drinks at a hotel bar changed history.

Powell is hard to crop.  It's also difficult to select just one portrait; he's very natural in front of a camera.  So I haven't worked on him yet.  Maybe someone else will beat me to it.  There are a lot of worthwhile images out there.
Posted by Lise Broer at 10:39 PM