What is a stain? 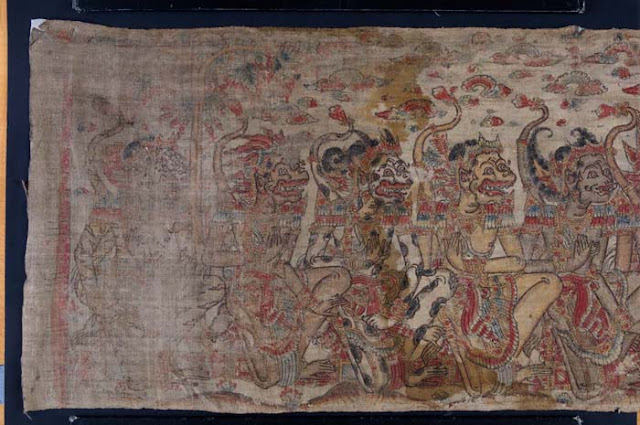 The Tropenmuseum has provided a very special challenge.  This post is probably the first glimpse of it to become visible to the public.  Roughly speaking, it's something like the Bayeux Tapestry of Indonesia.  The museum had it professionally photographed in twenty-nine parts.  Then they discovered that none of the digital segments quite matched together: the lighting was slightly uneven from left to right and the thin tapestry fabric had shifted so that the fibers and images no longer matched neatly.  These problems affected every one of the twenty-nine segments; the museum staff thought the image couldn't be stitched.  We've had very enthusiastic responses from the museum staff now that I've pieced it into a single file.  It's a huge job: 992.4 MB.  Now it gets interesting.

There's a lot more to be said about the digital restoration on an image that's nearly a gigabyte than one blog post can encapsulate.  One part that's easy to recognize is the large brown stain that runs vertically along this segment.  Today's post takes a different approach to repair than the last post because this time the original design remains visible within the damaged area.

In terms of digital image data, this stain consists of three elements:
If one thinks of a stain as too dark and deficient in blue and lacking contrast, then the way to eliminate the stain is to brighten, add blue, and restore contrast.  The concept is simple.  It's mainly a matter of creating enough masks to make the corrections in small increments.  Stains tend to be uneven so different portions require individual adjustments.  Here's an interim save as it looks on my monitor right now. 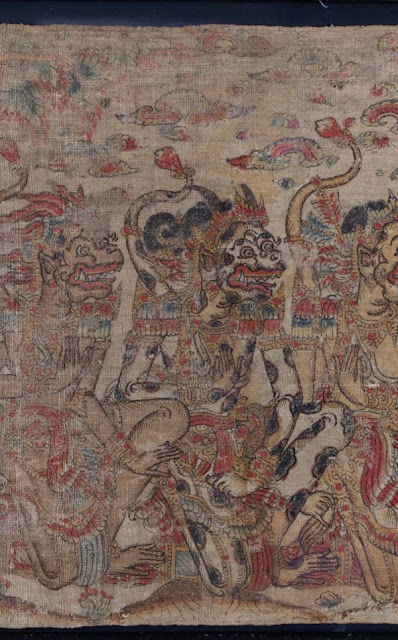 The proportions on this are reduced substantially from the original file, which was 13MB on this cropped area.  Yet it can be informative to see the work before the stain removal is complete.  No cloning has been done at all in this stain correction.