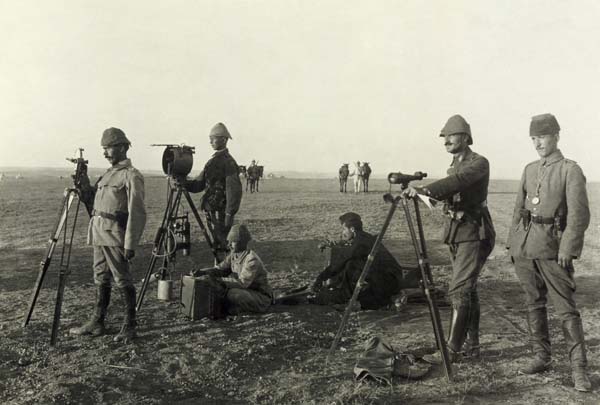 Most of the active Wikimedians are aware that the English language Wikipedia is largest in terms of total articles and the German Wikipedia is second, but it it comes as a surprise that the second largest featured program is not German but Turkish.

Of course I hope they also knock on the doors of museums in their home country. Also very curious about whether this generates synergies with text edits and improvements at their Wikipedia.

Two things happen universally when people from other parts of the world see restored featured pictures about their own culture:
Now and then I do restorations about Turkish history and culture, in gratitude and to give their project an extra boost.  The most recent of these is the 1917 Ottoman heliograph crew at Huj pictured above.  Its featured candidacy is underway at the Turkish Wikipedia.  Last week the Turkish Wikipedia passed Wikimedia Commons as the project where I have the second most featured content credits.  Darned if I understand the discussion other than the succession of green light icons.

The Turkish editors have created a model that can be emulated.  And I'm very interested in trying a pilot project with another Wikipedia to see whether a caption translation and featured picture drive would provide a shot in the arm in terms of editor participation and article growth. 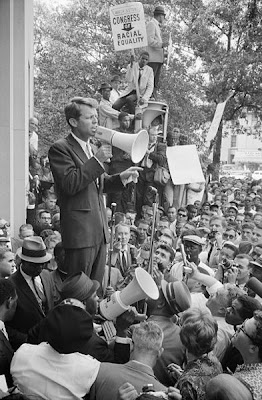 One place where I'm proposing a pilot program is the Irish language Wikipedia.  They already have a small featured picture program (two dozen images, a quarter of which I restored) and I know one of their administrators (hi there Alison) and have done a few restorations specific to her country and culture.  A few days ago President Kennedy came up in conversation and I asked whether she knew en:wiki has a featured picture of his brother.

There's Robert F. Kennedy at a CORE rally in 1963: the Attorney General of the United States speaking from the steps of the Justice Department in favor of racial equality.

Right now the Irish Wikipedia is the ninety-second largest Wikipedia with 9,274 total articles.  If their editor community is willing I'd like to help them emulate the Turkish featured picture program.

Although I can't speak a word of either language, if a picture is worth a thousand words we can hold a conversation.
Posted by Lise Broer at 9:03 PM

Interesting read, and very nice idea to try it on the Irish wikipedia. Please let me know if there's anything Wikimedia UK could do to help with this, e.g. if there are specific irish-related images that could be requested from museums for restoration, etc.

Thank you very much. Alison would know what material would be valued within the Irish Wikipedian community.

Thanks for posting this, Lise, and thanks for thinking of us small wikis :) We're very much a minority language but are proud of our wiki and our article count. Right now, we're hoping to break the magic 10k before the end of the year.

Right now, our "Íomhanna Roghnaithe" is being run by two, maybe three admins and only in the last, say, six months have we actually switched from a rather embarrassing annual pic rotation to a monthly one. All going well, we hope to step this up further.

Your pics have featured prominently so far as you have homed in on images which are important to our culture and, indeed, they match rather well with our better articles. Hence Daniel O'Connell, Waterford city, etc. I'm absolutely delighted to hear that you're focusing on ga.wikipedia and will do my absolute best to work with you on bringing our featured pics program up to speed. Your pictures so far - both yours and Jake Wartenberg's - have been only superb!!

I just wanted to say that I very much appreciate your work, and I'm glad that good images are getting appropriate recognition on other Wikipedias. If En:FPC keeps up like this then you've got other outlets.