The eyes have it 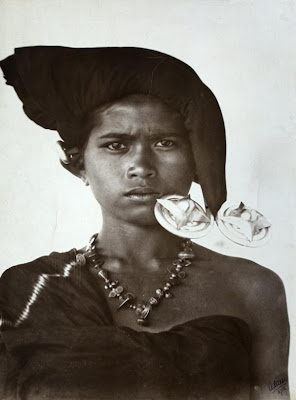 Received a beautiful comment from an Indonesian blogger about last month's Balinese dancers.  So here's another item from the Tropenmuseum's Indonesian collection.  The portrait at right was taken in 1918.  Curators have selected it  for restoration as having special significance and sent over a 25 MB file; I'm not certain exactly why they chose it.  The metalwork on this woman's headgear is fascinating.

Today's post is about the importance of eyes.  Other aspects of an image offer more flexibility in restoration: although it wouldn't matter much if a few pixels altered a crease on her garment, human facial expressions convey a great deal of information.  The original image looks pretty good at thumbnail, but this is her right eye, unedited, at 200% resolution. 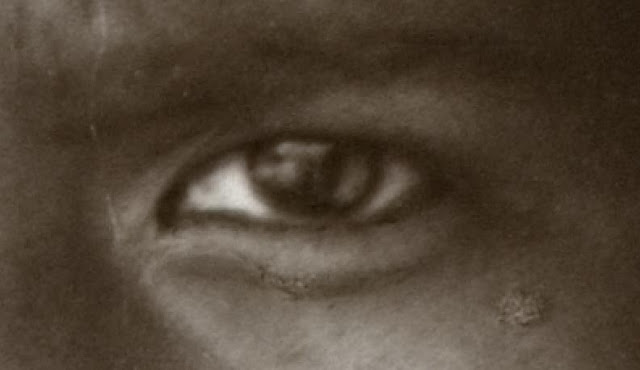 That's a vertical scratch from her eyebrow which passes down the left edge of her eye.  Then a second scratch curves with the lower edge of her eyelid and ends in a patch of corrosion, coupled with a second corrosion spot near the orbital bone at lower right.  The image also has several dust specks that are most noticeable as light marks on her eyebrow.  And if you look very carefully there's a series of faint horizontal scratches at the right edge of her eye.  Those horizontal scratches continue farther right in the image.

The goal is to correct all of this damage without altering her expression.  There's a hint of challenge to her face--not really hostile, but confident.  She looks like she's studying the photographer as intently as the camera studies her.

Beginners usually go for the largest areas of damage immediately.  It works better to begin with the small issues instead. 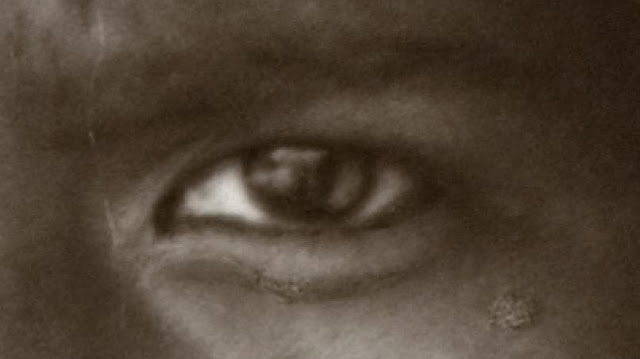 The smallest spots and scratches are out of the way now.  One needs to be careful with this and not go so far that the work damages skin tone.  Also, the shape of those knitted eyebrows forms part of her expression.  Our aim is realism rather than airbrushed perfection.  The next edit will work on that scratch at the lower eyelid. 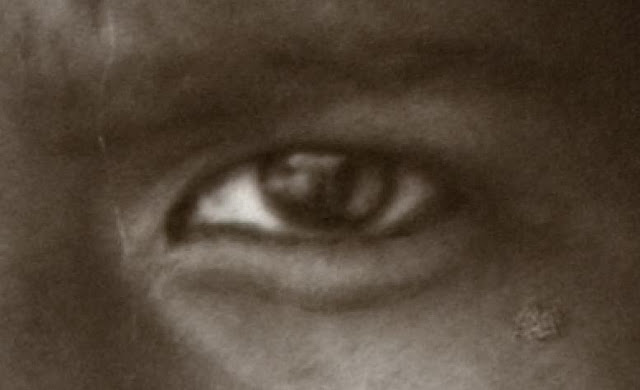 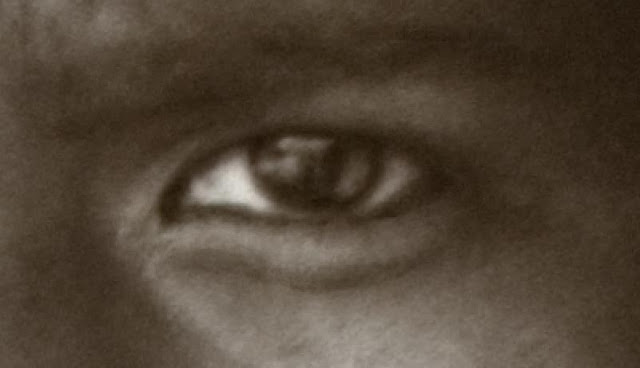 Here's the same closeup after the rest of the dirt and scratch removal is finished.  Haven't changed the histogram here; that will come later.  But the signs of photographic age don't distract from the look in her eye anymore.  Pulling back a bit, and viewing in the context of other unrestored areas of her face, have another look at the work in progress. 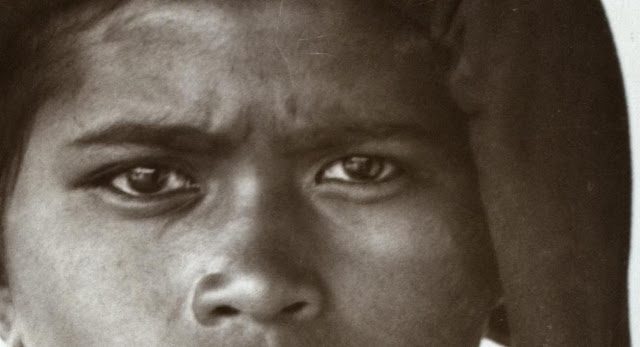 She would be about 110 years old if she were still alive today.  Perhaps the museum staff knows her name.

Sorry if this comes off challenging, it's not meant to be...I'm just interested... I see you removed what looks like to be a mole below the eye. Was it clear that this spot was damage to the photo? How do you tell?

Very good question. That spot was the last thing edited because I also wondered whether it was a mole. The photograph itself is slightly soft focus at this resolution, but both the "mole" and the eroded area at the scratch on her bottom eyelid have the same character to them, and are also in sharp focus. So I concluded it was print damage rather than a beauty mark.

Congratulations on your "Blog of Note" achievement. I found your blog a few days before it was chosen by blogger.

So, I wasn't surprised when you received the honor. I've always loved looking at photos. Doesn't matter whether I know the subjects or not. It's just something about the beauty found in a still shot. "A moment in time" is what I call it.

Shahartash said...
This comment has been removed by the author.
8:56 PM

Your imagery is so haunting, but wonderful at the same time. I am a fan