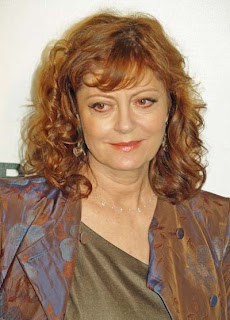 Andrew Sullivan of The Atlantic Monthly has picked up on David Shankbone's recent blog post about an encounter with Susan Sarandon, where Sarandon said she didn't know what Wikipedia is.

Well good for her!  It's refreshing to find a celebrity who is not fussed about her Wikipedia biography and not vain about the portrait that runs at the lead.  David took the shot at right last year at the Tribeca Film Festival.

She's one of the best actors in the business, she's been making films since 1970, and she looks fantastic in more ways than one.

I disagree with your assessment. First of all, in 2009 for someone to not know what Wikipedia is takes a tremendous degree of general ignorance about the modern world.

Second of all, this shouldn't be refreshing if her lack of care stems from ignorance. That's a very different situation from when someone knows about Wikipedia and doesn't care. Moreover, not knowing about it drastically increases the chance that we've got something seriously wrong on her page.