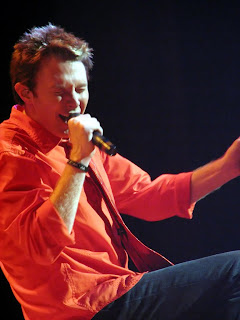 Breaking news: Clay Aiken is gay. As of this post 957 news sources are covering the story. It's good for the LGBT commuinity, I suppose, that another celebrity discusses his orientation in public. This sort of thing breaks down barriers and prejudices. So I'm balancing an urge to snark thank you, Clay, we never would have guessed with recollections of how Liberace's professional manager tried to conceal the obvious weight loss of late stage AIDS by calling it a watermelon diet. It wasn't so long ago that things were very different.

Still, 957 articles? Do you ever wonder whether really important news is getting shoved aside for celebrity stories?

Google News lists 19 stories right now for something else that's harder summarize in a punchy headline. It turns out that medical doctors may be getting misled into overprescribing expensive new medicines because drug companies have been selectively publishing the research data that makes their new products look best. It's one thing when it happens in company advertising (everyone expects that), but this has been happening in medical journals: pharmaceutical firms have been cherry picking the most favorable studies for publication in readily indexed journals and burying the tests that showed less effectiveness or major side effects. That's troubling because mainstream scientific literature is what good doctors are supposed to be reading to keep up with developments in their field.

So when you've got a problem and your doctor looks up the scientific research to decide on the right treatment, glowing results turn up for expensive new drugs. That means you pay more for medicine that may not be better. Even if your pharmacy fee is paid or fixed, that's still coming out of your premiums. In fact it's coming out of your premiums to pay for other people's overpriced drugs whether you're taking medication or not. It's coming out of your tax dollars too, to pay for all those people on Medicaid and Medicare (or for your national health service if you aren't in the United States). It's not the patients' fault or the doctors' fault--the drug companies have been filtering the information.

Does that make you angry? I sure don't like it.

Actually those older medications are sometimes the wiser choice. The medical profession knows what the long term health effects are for medicines that have been available a long time. So if two different drugs are equally effective and all the other factors are about the same, with an established medication you can find out more about interactions with other drugs or what health effects you might face 10 or 20 years from now. Even if the drug companies were publishing all the information they have, they wouldn't be able to tell you that much about new medicines.

This brings us to Wikinews and the power that puts into ordinary people's hands, because one of those 19 Google indexed health stories is mine. There's also good news in it: Congress and the President got wise to what was happening and passed new legislation that goes into effect soon. So the companies that get FDA drug approvals will have to start entering summaries of all the relevant research into a public database--not just the part of it that could boost their firm's stock value.

After years of digging beneath celebrity gossip to get to the meaty news, it's a pleasant change to have a place like Wikinews where the stories are chosen by volunteers who care instead of by firms that are in the business of selling eyeballs to advertisers. With all due respect to Mr. Aiken, this hits closer to home.
Posted by Lise Broer at 7:20 PM

The largest medical journals already have a policy to only publish research about which they were notified before it started (and then they will publish it regardless of the outcome). You can read a bit about that in the Wikipedia article about publication bias.

And now I feel bad for writing Wikinews stories about
celebrity lawyers getting disbarred
:(